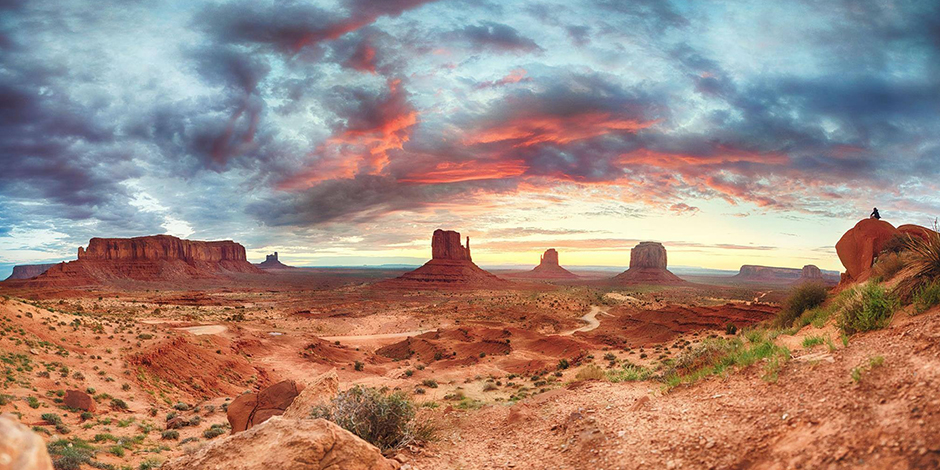 Monument Valley- located on the Colorado Plateau, located in southeastern Utah near the Arizona, New Mexico, and Colorado borders. Home to the Navajo Indians and the backdrop to many famous old western movies. The sandstone buttes stagger out of the ground and truly inspire awe to everyone who is lucky enough to visit. Guests can enjoy a 17 mile dirt road drive which takes about three hours to complete by car. But to really experience the majestic beauty of Monument Valley, visitors should consider taking a Navajo guided tour through the backcountry, enjoying more remote area only accessible with a Navajo Guide.

Monument Valley formed over hundreds of millions of years as three distinct layers of sandstone eroded due to wind and water. The lowest layer, the Organ Rock Shale layer, and the middle layer, the de Chelly Sandstone layer, date back to the Permian through the Jurassic time periods. The top layer, the Moenkopi Formation, was laid down during the Lower Triassic and Middle Triassic periods, approximately 240 million years ago.

Many of the greatest Westerns have used Monument Valley as a backdrop, including John Ford’s 1939 film Stagecoach featuring legendary John Wayne. Both John Ford and John Wayne would frequent this location throughout their lives and careers following the movie’s success. Dozens of other movies were filmed partly or wholly in Monument Valley over the subsequent years. Stanley Kubrick used the location during the filming of 2001: A Space Odyssey; Tom Hanks finished his cross country run in Forrest Gump on US Route 163 in the Monument Valley; and Disney’s Cars used a spoof of Monument Valley, so named Ornament Valley in the epic film. More recently the Lone Ranger and the new Transformers movie were filmed on location in Monument Valley.

The tour offers spectacular views of many ancient and well-preserved Anasazi dwellings including pictographs and natural arches. The Anasazi Indians disappeared about 800 years ago.

Pay close attention to how peaceful mother nature truly is in one of the least explored places in the world. Consider an overnight tour to Hunt’s Mesa if you have the time and don’t forget to sample the local Navajo Taco’s!