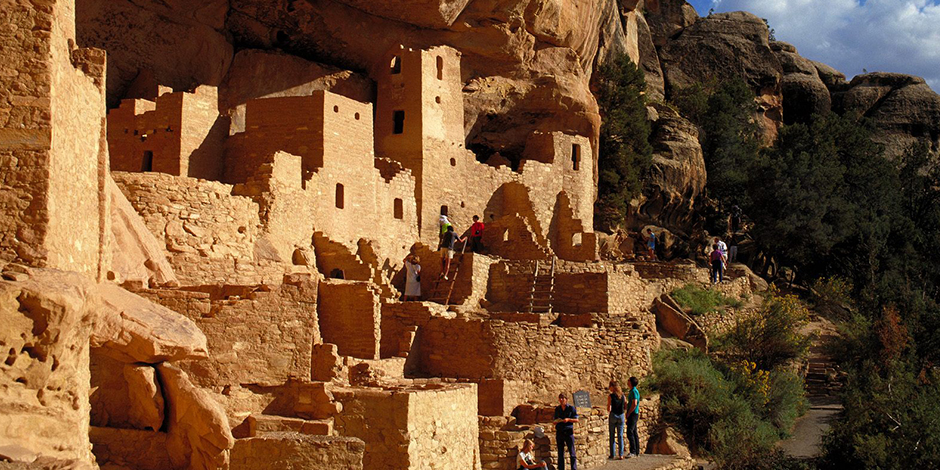 Mesa Verde national park is located in the southwest corner of Colorado near the four corners. Nearly 600,000 people visit the ruins and national park every year.

Mesa Verde covers 52,000 acres and elevations range from 6,900 feet to nearly 9,000 feet. Canyons were carved into the scenery by ancient oceans and rivers. The highest peak in Mesa Verde is the Park Point, which can be accessed by multiple walking, hiking, and bike trails. The terrain is comprised of fine sandstone known as Mancos Shale on top of a harder rock formation called the Dakota Sandstone.

Mesa Verde is one of the most unique and popular national parks in the United States. It is one of the few national parks that also have the distinction of also being a UNESCO World Heritage Site. It is also the largest archaeological preserve in the United States. The highlight of the Mesa Verde National Park is undoubtedly the ruins and remains of the homes and villages of the Pueblo people, sometimes also referred to as the Anasazi.

The Pueblos occupied the Mesa Verde between the years 600 and 1300. Some architects speculate that they may have continued to live there until around the 1400s. Since the Pueblos kept no written records, little is known about when and why they left the Mesa Verde, which means the “Green Table.” The little that is known about this mysterious group of people is based on the studies the Pueblo’s tools, pottery, and other artifacts that have been found in the region by architects.

This trail is a ranger led activity with no pre booking allowed. Tours are offered for a small fee on a first come first serve basis. Get there early!

It’s the largest cliff dwelling in North America offering spectacular insight into the ancient Puebloan lifestyle. It’s a fun tour which involves ladders and in some places a little crawling!